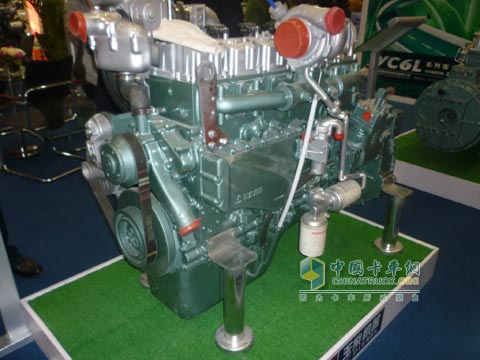 More gratifying is that the Group's six major industrial sectors, including the engine, engineering machinery, lubricants and chemicals and logistics and trade, including the four major plates, sales revenue increased by more than 30% year on year. Among them, the core company Yuchai Machinery Co., Ltd. achieved engine sales exceeding 500,000 units by the end of November, creating a jump at the customs level!

This is the perfect ending of the â€œEleventh Five-Year Planâ€ of Yuchai Group: One quarter in advance of the previous year's sales revenue, entered the ranks of 30 billion yuan of enterprises, and a record high.

This is a high level of historical leapfrogging: From a sales scale of RMB12.1 billion to a business performance of RMB30 billion, the Yuchai Group experienced a number of unfavorable factors such as the snowstorm in the south and the global financial crisis in a short period of five years. The adjustment has improved and the operating efficiency has steadily increased. From the 231th place in 2005 to 227th place in 2010, it is ranked among the Top 500 Chinese Enterprises!

Adjust the structure and step into a healthy development track

The â€œEleventh Five-Yearâ€ Yuchai stepped up one step at a time, playing steadily and stably.

In 2005, Yuchai Group experienced a dilemma of the industry's decline. In the face of severe challenges, Yuchai teamed up with one another to fight for the market and bucked the trend, and finally created a unique â€œYuchai phenomenonâ€ with sales of RMB 12.1 billion. ;

In early 2006, Yu Ping, chairman of the Board of Directors of Yuchai Group, led the management team to make the amazing promise of â€œrebuilding a Yuchao in three yearsâ€ and put forward the â€œgreen development, harmonious and win-winâ€ corporate strategy;

In 2008, Yuchai Group achieved sales of 20.988 billion yuan, once again refreshing the company's historical record, and the promise of â€œrebuilding a Yuchai in three yearsâ€ was perfectly realized;

Here, in order to clarify the direction of future development, Yuchai Group has proposed the strategic goals for the development of the next ten years, clearly establishing a business platform with annual sales of RMB 100 billion, and establishing the vision of â€œbuilding a world-renowned brand and achieving a large multinational enterprise groupâ€. , use international standards to regulate the development of enterprises.

In order to achieve its goal, Yuchai improved the company's corporate governance structure, rationalized property rights relations, parent company management system, established the group's parent company status, and adopted a combination of "strategic control + financial management and control" of the hybrid management model for each child. The company manages, concentrates on strengthening and expanding the main industry cluster, and gradually withdraws its subsidiaries that are not strongly related to the core business and has a small scale, while it controls the fine companies with large correlation and important core components. Establish a full-time chairman and financial appointment system for subsidiaries, and provide technical, capital, management, and market support to strive to make the subsidiary bigger and stronger.

Five years have passed and Yuchai's six major industrial sectors have moved forward: In addition to the dedicated automotive segment, the remaining segments exceeded the scale of RMB 2 billion from January to October 2010; today, sales revenue exceeds that of the Groupâ€™s 30 subsidiaries. There are 8 subsidiaries with a value of 1 billion yuan, overseas operations in over 80 countries such as Southeast Asia, the Americas, and Africa. The Yuchai Group is making strides toward the international arena.

Technological innovation is the key to enhancing the core competitiveness of enterprises.

In engine products, Yuchai's products have expanded from five major categories and 13 major series in 2005 to include six categories: 22 series, including automotive, marine, construction machinery, agricultural machinery, power generation equipment, and passenger vehicles. The sedan, light, medium and heavy-duty multi-cylinder diesel engines have become the preferred supporting power for domestic and foreign commercial vehicles, construction machinery and agricultural machinery. For example, Yuchai has successfully developed the national emission standards 2 to 5 years earlier than the national emission standards, and led the domestic counterparts to launch in batches the 3, 4 and 5 diesel engines of the country, firmly occupying Chinaâ€™s green power initiative. Among them, the National 4 engine is the main domestic green power for the 2008 Beijing Olympics. The new vehicle fitted with the Yuchai State 5 engine was formally operated in Beijing in October 2010; more than 8,000 buses serving the Guangzhou Asian Games were equipped with Yuchai engines, accounting for More than 95%.

In the engineering machinery segment, Yuchai Heavy Industry has diversified its product brands and has more than 40 series and over 150 varieties. On October 23, Yuchai Heavy Industries Co., Ltd. announced the launch of its 50,000th excavator at the launch of 12 new products, 9 of which have filled the Guangxi gap: Guangxi's first 42-ton excavator and the first 46 Tonnage of large-scale excavators, the first demolition machine, the first high-altitude truck, the first wide-body dump truck, the first large-scale rotary drilling, some of the new products to fill the gaps in the country.

In addition, the Lubricants Chemicals segment has become one of Yuchaiâ€™s most growth potential segments, which represents a year-on-year increase of over 114%. The logistics and electromechanical segment and Tsinghua University jointly developed a â€œsupply-chain logistics integration projectâ€ that enables the performance of logistics companies to increase year-on-year. Increased by more than 51%.

Fuping said that in the past five years, Yuchai has obtained more than 500 national patents. The Yuchai Machinery Co., Ltd.'s technology center ranks 27th among the 575 enterprise technology centers nationwide, ranking first in the engine industry.

"Green development, harmony and win-win" is Yuchai's corporate core philosophy. Yuchai should strive to be China's â€œcontroller of the largest active pollution sourceâ€.

How to improve the production capacity and reduce the emission of pollutants? Yuchai heavy attack, the introduction of a large number of internationally advanced level of technical equipment and technology, both to increase the production capacity, but also reduce the total discharge of pollutants. Yuchai heavy machinery, light engine and other engine production lines are all imported advanced processing centers, washing machines, measuring systems, assembly systems, etc.; Yuchai Foundry Center projects the key and important processes are imported equipment of international famous brands, auxiliary processes used The first-class equipment in China; the first time robots use the core technology in the world, the casting materials can be reduced by 10%, the energy consumption in the production process is reduced by 8%, the overall scrap rate of castings is reduced to less than 1%, and the annual cost reduction reaches 37.36 million yuan. After the entire casting center is completed, With an annual output of 300,000 tons of castings, it will become the largest diesel engine casting production base in Asia and is an important support for Yuchaiâ€™s production of green energy-saving and environmental protection.

In accelerating development, Yuchai has also actively explored the best mode for the development of the recycling economy in the diesel engine industry. Together with the Caterpillar company in the United States, Yuchai has established an annual production capacity of 30,000 engine remanufacturing companies and is committed to promoting the effective practice of recycling low-carbon economy development.

At the end of 2009, the worldâ€™s first engine that uses existing component technologies to realize renewable air-hybrid functions was successfully launched at Yuchai. Low-carbon, energy-efficient and high-efficiency engines are put into road transport. Each vehicle can at least reduce emissions of carbon dioxide by 5 tons per year.

Due to the mass production and use of environmentally friendly engines, sales of Yuchai's multi-cylinder diesel engines in 2009 increased by 7 times compared to 1994, and the total particulate emissions of products did not increase substantially, making a huge contribution to environmental protection. In respect of energy saving, the fuel consumption rate of the Yuchai diesel engine's rated power was reduced from 230g/kW.h for the YC6105QC machine in 1998 to 197g/kW.h for the YC6L machine in 2009, a reduction of 14%, achieving a substantial fuel consumption of the diesel engine. Reduced goals.

At present, Yuchai has been deployed throughout the country. In the past two years, Yuchai has launched 14 major investment projects, of which the US$800 million investment in the Yuchai Heavy Industry East Base construction project will lay the foundation for Yuchai Heavy Industry to achieve a sales scale of RMB 10 billion; it will establish a joint venture with Jirui United Heavy Truck. Yuchai United Power will be put into operation at the end of this year. The low-speed, high-power marine diesel engine construction project jointly developed with the WÃ¤rtsilÃ¤ company in Switzerland, the Ziyang project in cooperation with the CSR Group, and the remanufacturing enterprise jointly established with Caterpillar in the United States have greatly expanded Yuchai's new development space.

At the same time as the layout of the industry, Yuchai accelerated the international development of the company in accordance with the business philosophy of â€œexcellent quality and international Yuchaiâ€: continuously improving sales and service network construction, and building 45 domestic and foreign offices and more than 2,000 services. The station became the most widely used diesel engine manufacturer in the domestic service network.

In the past five years, Yuchai's engine exports have soared: the annual export of engines exceeds 30,000 units, the overseas market has more than 120,000 units, and the Southeast Asian market has more than 50,000 units. With the advent of the China-ASEAN Free Trade Area, ASEAN countries have become Yuchaiâ€™s strong market. Yuchai Guocheng 4 engines have successfully entered the market in New Zealand and Hong Kong, China. Yuchai's ship machines have been exported to more than 1,600 units in Japan. It is the only domestic branded power product that China currently exports to developed countries.

Brilliant history. Facing the future, Yuchai people are confident that by 2015, they will achieve the business target of 80 billion to 100 billion yuan. From the 10 billion level to the 100 billion level, Yuchai will continue to focus on concepts, capital, management, model, and competition. Strategies and other aspects of adjustment and innovation, continue to "Eleventh Five-Year" glory, and strive to create "100 billion Yuchai"!

People firmly believe that as long as Yuchai people continue to innovate, it is at the foot of the road to realize the â€œOne Thousand Billion Yuchaiâ€.